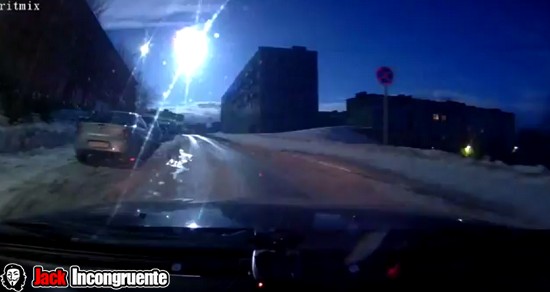 April 2014 -. Again in Russia another meteorite falls back, does not have much time something similar happened .. what is happening?

The authorities have indicated that no damage or injury, but apparently, this meteorite was not as potent as it was recorded in 2013 in Chelyabinsk. Inhabitants of the Russian city of Murmansk on Friday published several videos that can be seen what appears to be a meteor across the sky at high speed.

Here the exact time when the meteorite illuminates the Russian city:

As reported by Russia Today (RT), the celestial body would have disintegrated away from the Earth’s surface, as there were no reports of damage in the area where they were captured videos.

In the images, captured from various points of Murmansk, a large mass is throwing several flashes in its path without being able to determine if any surface crashes.

The videos captured by cameras installed in vehicles, very common in Russia, were uploaded to YouTube.

be coincidence that they end up falling in Russia, well when you consider that Russia is very large, it may be that if … just a coincidence and good luck that falls into inhabited places.