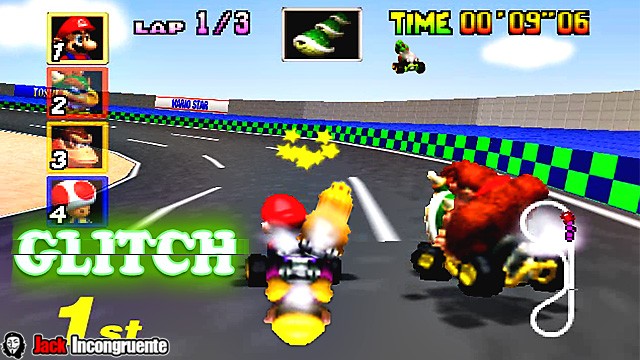 I hope you still remember Mario Kart 64, one of the classic Nintendo games released in 1996 in Japan and coming to North America in 1997 with some minor changes, such as the presentation. Voices selection.And some small skits companies in Europe and North America we could not enjoy due to legal problems that could arise in japan are more tolerant to this kind of thing.

Within some of these changes we can see the brand Marioro, referring to the Malboro cigarettes.

Agip brand of automotive gasoline and diesel retailer parodied with the name “Luigip”. 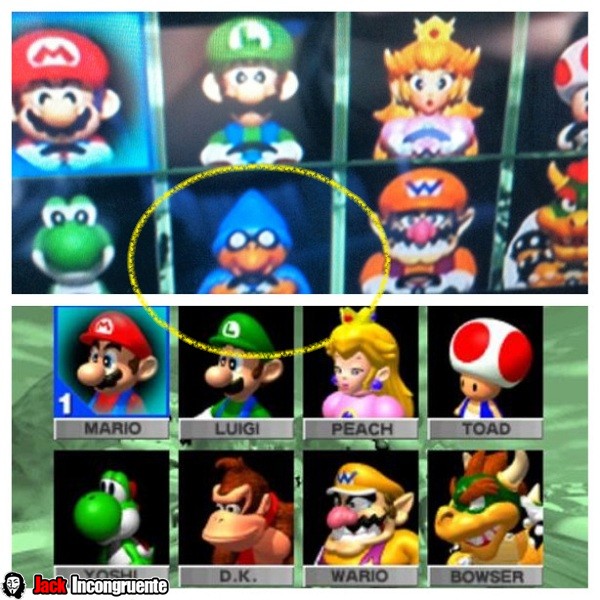 Kamek is also said that going to be a character in the template, but was changed to donkey kong.

But in this great multiplayer we can find even more interesting, as some tricks and glichs that can produce during the game and to help you finish faster circuits.

The first is in the circuit-Flower cup Toad’s Turnpike. Started the normal race, you have to take into account the map because near where it crosses the road and we turn to leap out of the encircled.

Lakitu when we enter now turn to the right and jump, then a glich that will give us a good sale of our competitors produce. With a little practice will go first and we can repeat at every turn.

This circuit began normally, we do not need any special item, only to have a good eye, because in the third curve must jump and stick with a polygon, we know that we have done well, because Lakitu will put us in front of the turbo lines Now we only jump left trying to glue the edges of land, now Lakitu will put us closer to the goal, saving to turn around. It’s just a matter of repeating the procedure to have increasing benefits from our competitors.

The key to producing this glich is getting the star item and we can carry out any LAP, when we get the star must follow the railroad tracks and enter the tunnel when we Lakitu notify us backwards, we must change the star and turn, this means a glich that will give us a full lap ahead will occur, otherwise it will be a cinch.

One of the easiest and most advantageous when we start the race to pull back and when we were notified that we are in the opposite direction to turn and go to the snow but not touching the road, to reach the edge of the stage glichs , Lakitu take us to the circuit, but glich that will give us an advantage will occur, if we repeat the procedure once more, we now count as one full turn. In the end it’s just a matter of crossing the finish line.

Similarly the race should start normally, no need of any special item, just be careful on the map in the small curve. Upon arrival to the curve we just hit near the end and take a leap which will produce more than normal, allowing up and getting a small advantage of our competitors, we can repeat this at every turn.

When starting the race we approach the edge and take a leap, allowing us to jump the barrier, now must accommodate close to where the finish line to collide with the wall and jumping, resulting in an extra jump enabling us to move to the other side, cross the goal and be counted as a return, just a matter of repeating the procedure to finish the race with the lead, 2 laps over our competitors.

In this circuit it is important to get an item that gives us speed, or fungi can be a star. We must return close to target and accommodate us and to refer the pine, we must activate the star or the fungus and when we reach the edge to jump, what matters is hitting the black line near the precipice, if we do well Lakito We return to the circuit and a glich to tell us as a return will occur. Similarly only have to repeat the process 2 more times to finish the race.

When you start the race we will have to go back and enter the cave, here we have to pay attention to this polygon, because out there, we have to jump, to drop a glich will occur and will be counted as a return, just a matter of repeating what 2 more times.

When starting the race and before going down the slope, we must turn left and take a small leap to exit the loop and go to the other end, now you need is the item of the green turtle, which Being first is common that we touch that item.

Since you will use before reaching the goal. With the item turtle we use it near the goal and throw so we stick to ourselves and then we leave the circuit, as we fall into the abyss, if they realize we are crossing the line when Lakitu rejoin us at circuit one glich him to give us an extra lap is automatically produced and now we are in the final lap. Only a matter of completing the circuit with a good lead.