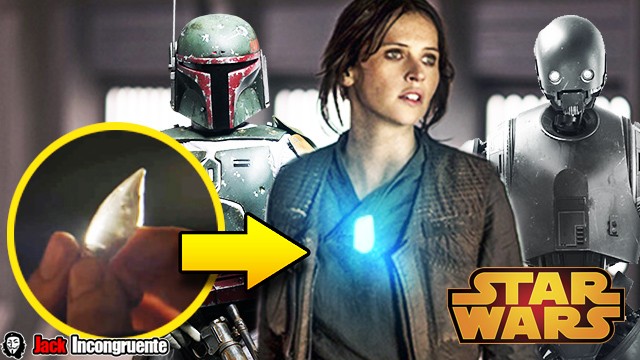 For this film Star wars Rogue One  the study faces to decide between two actors for the role of Chirrut, for one side they had Donnie Yen and for the other side Jet Li, they considered to Donnie Yen because wage was 4 million dollars and Jet Li asked for a wage of 10 million dollars, and if Yen did not accept the role of Chirrut, director Gareth Edwards would offer the role to Baze. 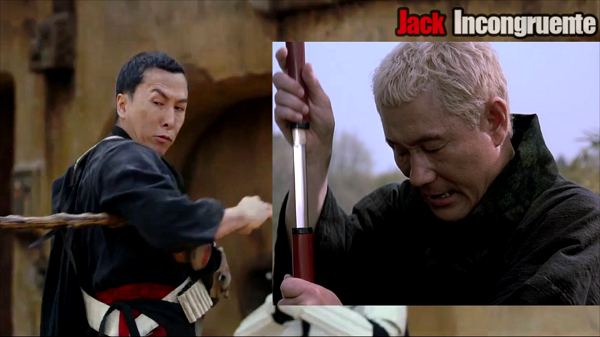 This blind character, guardian of the Whills, it was based on Zatoichi, the main character of a samurai movie.

The Fortress of Darth Vader 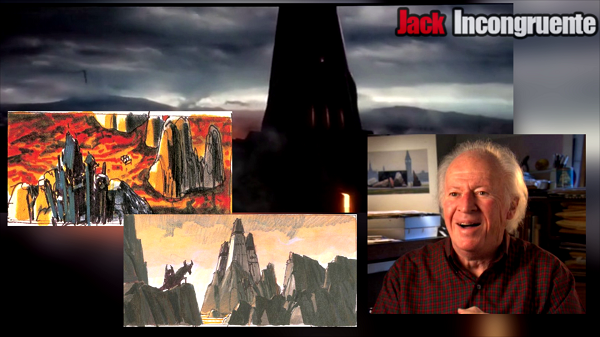 In this film is showed for the first time the Fortress of Darth Vader, resembling to a castle build on top of an active volcano, this concept was based on unused design of Ralph McQuarrie.

Is commented that in the costume design were utilized some of the costumes from the old movies Star Wars A New Hope from 1977 and The Empire Strikes Back from 1980.

Also is the first movie where we don’t see the classical text moving away.

The actress Genevieve O’Reilly came back to play his paper as Mon Mothma, she participated on Star Wars Episode III –The Revenge of the Siths on the year 2005-.

If you remember good Cassien, he talks about the Whills when he talks to Jyn, this were a beings very wise, which they narrate the story of “A long time ago in a galaxy far far away…” It’s said that this is the race that Yoda belongs, but his is not confirmed, is almost a fact that in future films they take back this history or they give more data about it.

James Earl Jones is an actor who came back for the films of Star Wars, as the Dark Vader voice, and his last participation was on 2005 film Star Wars Episode III.

From this moment, Disney has no intention of letting a year without a Star Wars movie, in 2018 we will have Han Solo: A Star Wars Story.

The script was a headache, in the beginning Johm Knoll, specialist on visual effects of various films of Star Wars, he proposes to Kathleen Kennedy the idea of realizing an history as we saw it on this film.

Inmmediatly Disney hires to Gary Whitta for the first script, doing an excellent work, but thinking that the story still needed something, then Disney calls to Chris Weitz who wrote the script for The Golden Compass and Cinderella (2015) so he finish the script for Star Wars Rogue One, but at the end it didn’t satisfy Disney, so they hired to Christopher McQuarrie, who has been director of Mission: Impossible – Rogue Nation, so he can polish the script that Chris Weitz created, giving the last brushstrokes, and finally that’s the script that they used for the film.

Another actor was Peter Cushing, who was generated by computer, in his role of Grand Moff Tarkin, using the movement capture, making the face generation of special effects more incredible, some persons who went to the movie and aren’t fans of Star Wars, didn’t realize his character was created by CGI, since he has passed away in 1994 because of his cancer.

A dark saber? When Jyn and Cassian are on the great database, Jyn mentions the dark saber in the search results, which was the legendary saber that took the lifes of hundreds of Jedi, this weapon used were used by the Mandalorians, and we can see it on the animated tv shows of Star Wars Clone Wars and Star Wars Rebels.

A little nod to Star Wars Return fo the Jedi can be seen on the cave of Saw Guerrera, the soldiers are looking at a female Twi’lek dancer, which was a slave on the 1983 film.

The Imperial android C2-B5, is also seen in this movie. 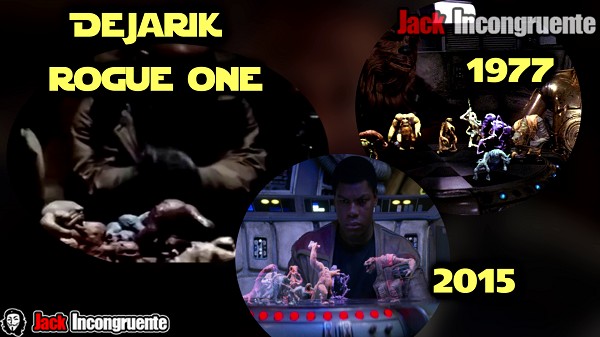 In the scene where Jyn and Cassian find the Saw’s fortress, we can see the Dejarik, a chess game seen on the 1977 film and in the 2015 film. This is an old version of the Dejarik, since is not a hologram, and is made of handmade figures.

“I have a bad feeling about this”

is a catchphrase often repeated on the Star Wars Saga and Rogue one couldn’t be the exception. When Cassian, Jyn and K-2SO are in the elevator, the android says the phrase, although his teammates tell him to shut up, because everytime this phrase is pronounced in the Star Wars universe, something bad happens.

Alan Tudyk, actor who interprets android K-2SO, improvised the slap that he gave the actor Diego Luna (Cassian), because director Gareth Edwars gave a lot of liberty to the actors so they can improvise in the film.

The actor of C-3PO, Anthony Daniels, confessed that he felt a little angry towards the actor of the droid K-2SO, Alan Tudyk, since he had more comfort playing his character with a special suit capturing his movement, and he had to suffer injures and hours of filming with the metallic suit of the droid C-3PO, so much that actor Anthony Daniels cursed Alan Tudyk, who replied joking with a “fu** you”

This is not the first job of Alan Tudyk with movement capture technology, he also was Sonny the robot on the film “I, Robot” of 2004.

The name for the character Jyn Erso was a reference to Jan Ors, character of the videogame Star Wars Dark Forces, whose objective is retrieve the Death Star blueprints.

The character of Saw Guerrera, which is the third character brought from the Star Wars Videogames to a movie. Boba Fett was the first (who first real appearance was on The Star Wars Holiday Special (1978), then General Griveous from the series Star Wars: The Clone Wars from 2003.

In the scene where Jyn and Cassien walk towards the streets of Jedha, she hits the shoulder of another man, who angrily says to her to watch his steps, this two characters are Dr. Evanzan and Ponda Baba, which we saw on the film of Star Wars Episode IV, when Obi-Wan Kenobi cuts the Ponda Baba arm for harassing Luke.

On the walls of the cave of Saw Gerrera, we can see figures of monsters, which are references to the films directed by director Gareth Edwards, as the godzilla movie of 2014.

Actress like Tatiana Maslany, Rooney Mara and Kate Mara auditioned for the role of Jyn Erso, but in the end was Felicity Jones who got the role.

Also, actors like Aaron Paul, Edgar Ramirez and Sam Claflin were taken in consideration by the role of Cassian Andor, but for some strange reason, director Gareth Edwards wanted that Diego Luna was in the movie, which confused the mexican actor.

In this film was presented for the first time how is the action from the inside the cabin when “jumping to hyperspace” since the 1983 film, also seen in The Force Awakens trailer, but not utilized ‘till this film.

In the scene where they are escaping from the city, captain Cassian says the phrase “Punch it” to his co-pilot K-2SO, which is a reference to Han Solo, who tells his co-pilot the phrase “Ok, punch, Chewie “.

As indicated in the series Clone War and Rebels, the color of a kyber crystal, determines the power light of the saber, in Rogue one, we can see that the crystal of Jyn is white, which makes it extremely rare. The only Character that has had a white saber is Ahsoka Tano, in the animated series. 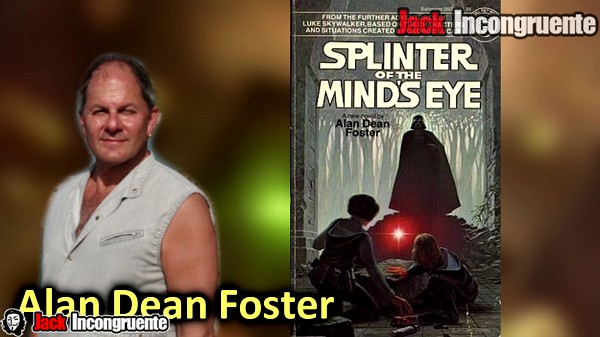 The idea of ​​Kyber crystals arose in Alan Dean Foster’s novel, “Splinter of the Mind’s Eye”.

Carrie Fisher (Princess Leia) died just a week after the premiere of the movie Star Wars Rogue one, the actress suffered a heart attack, while on a flight from London to Los Angeles on December 27, 2016. She died in The medical center of UCLA and a day later on December 28, his mother actress Debbie Reynolds while preparing his daughter’s funeral suffered a fatal stroke. 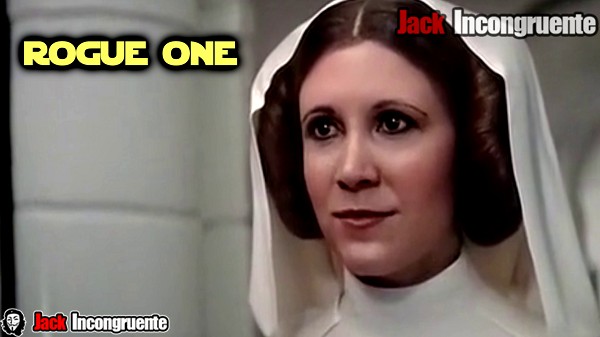 In this film we were able to see a young Carrie Fisher in her role of computer-generated Princess Leia. 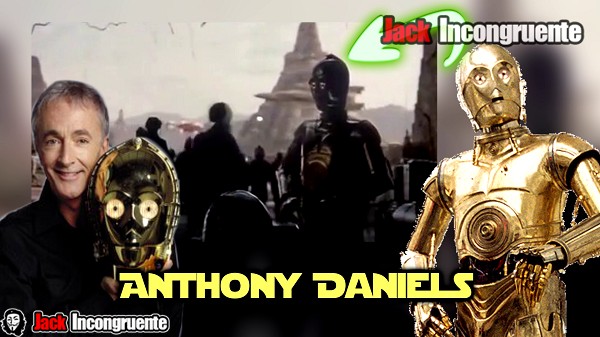 In this film we see a brief appearance of the androids R2-D2 and C-3PO, this makes actor Anthony Daniels the only actor who has appeared in all the saga movies so far.

Jyn’s father, Galen Erso, is inspired on theoretical physicist J. Robert Oppenheimer, the so-called “father of the atomic bomb”. Both men have the guilty feeling of building a weapon of mass destruction.

In the original script of the film the characters of Jyn and Cassian manage to escape and survive at the end of the film, but the director Gareth Edwards expressed to the directors of Disney that they all died, thought that his idea would not be accepted because it is Disney, but to his surprise, Kathleen Kennedy, Disney executive, accepted and gave permission for all the characters to die in this movie.

Said in the above, it was planned in the final scene that Darth Vader were the person in charge of murdering Jyn and Cassian, but it was thought that it would be too dark, so it was only assigned to Darth Vader to kill randomly a group of rebels, as we saw in the film.

The planet from which Jin is rescued is called Wobani, which is an anagram for Obi-Wan. 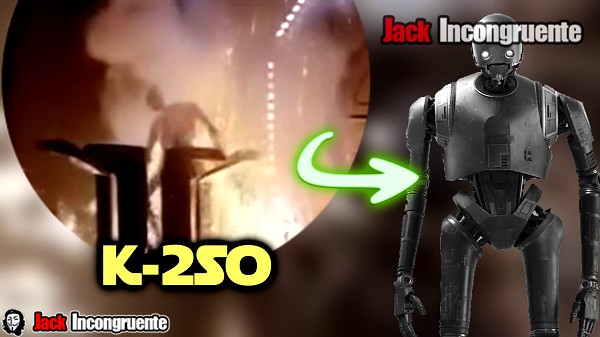 K-2SO is the first android to commit suicide in a Star Wars movie.

On the other hand, is the first Star Wars movie where no main character uses a lightsaber, except for the end, where Darth Vader makes use of his saber, but without a doubt it would have been amazing to see Chirrut using a saber in his battle scene.

The director of this film, Gareth Edwards, made a cameo in the end, is the rebel in charge of expelling the Tantive IV.

The plans of the Death Star are located in an installation on the planet Scarif, this name of Scarif, refers in fact to an acronym SCIF skiff which is a secure installation, used to store confidential or classified data, for example President Barack Obama used these facilities to talk on safe phones after the 2016 Brussels bombing.

Finally I do not know what it was like Diego Moon in this film, I personally felt a strange feeling to see this actor in a movie Star Wars, I did not expect it, the actor comments that the recordings were fascinating since much of the set was real and not computer generated, this film was almost like a tribute to that movie of 1977 where much of the set and decorated existed physically, the ships, the arms were very designed, had a weight and when they released they released compressed air that Made it feel as if you had powered a real weapon. Although he says that it was very difficult to act in english, his accent was very noticeable, but that was the main idea of ​​the director Gareth Edwards, what he wanted to represent with this film with the group of rebels, people of different cultures, listen to different accents, the intention was to send that message, to see how this team of people, although they are different, if they unite for an end, leaving the differences on the one hand, are capable of performing amazing things.