Dexmo F2 the sense of touch in the virtual world 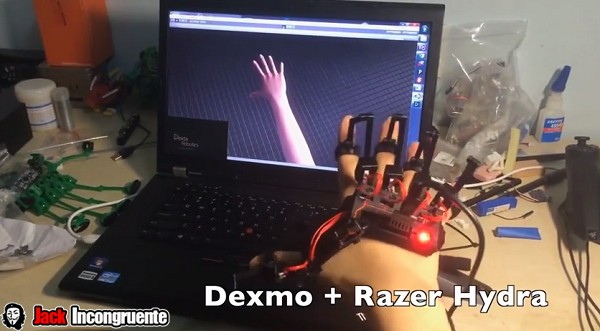 Recently on Reddit Oculus a fantastic device is being developed by a technology company Dextra Robotics, which have called Dexmo F2 your device, an exoskeleton that is placed in our hands able to recreate the sense of touch in a virtual environment.

Dextra Robotics have explained that in the thumb and the index of this device finger have a special hardware called “units forced feedback” with whom in a virtual environment when a person holds an object, signals are sent through the SDK and are transmitted to the device Dexmo F2, then the joints of the device are locked and try to move your fingers in or close more hand force is created at the tip of the thumb and index finger, with the pressure being It holds your fingers will give you the feeling of touching the object in the virtual mute.

Nothing like a prototype touch feeling only works on 2 fingers (thumb and index) and so says Dextra Robotics device still lacks a lot and have no knowledge of how many people would be interested in the device, which They have launched a campaign on Kickstarter page where they are starting to sell the device at a price of $ 200 dlls, and if you have good success began to implement the technology in all fingers of the device.

The truth would be interesting someday to see this kind of devices implemented in a video game and have no doubt that within a few years some company like Sony or Microsoft will be encouraged to create something.