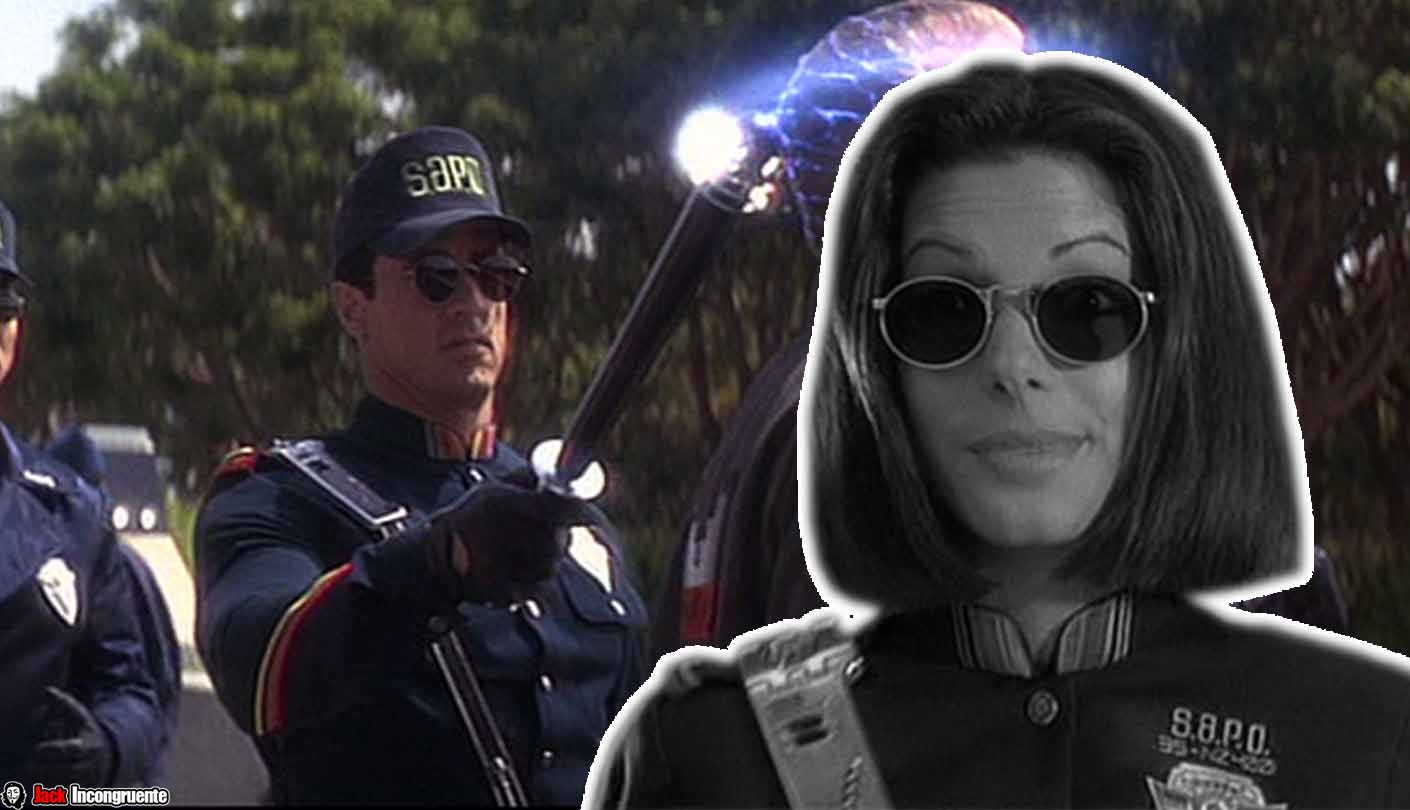 The spread of a deadly virus, zero physical contact, censorship on social networks, a ban on sugary products, a ban on abortion, the chip in the human body (Neuralink) and penalties for inappropriate behavior are just some of the things that the movie The Demolition Man predicted in 1993 and that today are a reality.

If anything grabs our attention in this perfect future is that everything is politically correct, unhealthy food is prohibited, cookies, alcohol, caffeine, chips, sugary juices, even salt is prohibited. Bad words too, if you mistakenly curse, you will be liable to a penalty, which will be recorded in your history and could give you trouble when it comes to getting a job or asking for a loan. This, as absurd as it may seem, is not very far from what is currently happening in China, because its technological future in a few years can make that happen. You must remember that China, in 2018, activated a technology to measure the “social value” of each citizen. So, on train cars, it was very common to hear these kinds of recordings on the Shanghai train car:

“Dear passengers, those who travel without a ticket, who behave disorderly or who smoke in public places will be punished according to the rules and your behavior will be registered in the credit and individual information system. To avoid any negative records on your personal credit, obey the rules and orders at the train and at the station.”

Here’s a dystopian vision of the future: A real announcement I recorded on the Beijing-Shanghai bullet train. (I’ve subtitled it so you can watch in silence.) pic.twitter.com/ZoRWtdcSMy

When remembering this movie I felt in the middle of 2020, and I say this because currently because of the COVID-19 virus, it is not advisable to shake hands, hug, or kiss. Demolition Man tells us that physical contact is totally prohibited, no year is specified, but it suggests that between 2000 and 2032 a virus that caused the fall of a large part of society emerged, physical contact and fluid exchange caused more viruses to appear in the world. For this reason, prohibition of physical contact was the only solution to avoid the contagion of these increasingly lethal viruses.

But that’s not it, there’s something really curious that almost hit the nail on the head: Lenina Huxley tells John Spartan about the Arnold Schwarzenegger Presidential Library, explaining that, based on the great popularity of his movies, the 61st constitutional amendment was passed, which allowed Schwarzenegger to run for President. Well, in real life, 10 years after this movie, Schwarzenegger was elected governor of California. Shortly thereafter, three senators separately proposed amendments to the U.S. Constitution to allow naturalized citizens to become President.

And it seems that everyone wants Arnold Schwarzenegger to be President of the USA in the future, because in the movie The Simpsons, Schwarzenegger holds the presidency of the country and you know that The Simpsons are never wrong.

THE 3 SHELLS ( THE MYSTERY OF THE FILM DEMOLITION MAN MOVIE)

Surely, both you and I were left with the doubt of how the 3 snails are used, we only have 12 years to prepare for 2032, so that when we go to the bathroom and encounter this, knowing how to use it properly. But before we solve this mystery, let’s go back a little bit: How did the idea of the three snails come up?

Daniel Waters, who was one of those in charge of writing the script, got to the part where John Spartan had to go to the bathroom in the future, he was given the indication to invent something curious and funny, where John Spartan would use some futuristic element, the writer could not think of anything, he was totally blocked. At that time, he called one of his friends; also a scriptwriter, to see if he could think of anything, curiously when he picked up the phone, his friend was in the bathroom. He was not much of help, the only thing he said was: “Look, I cannot think of anything, but here I have some snails in my bathroom as decoration.”

So Daniel Waters didn’t think too much about it, nor did he brood on the matter, so he immediately took his friend’s suggestion. 3 snails or 3 shells were put in the script as futuristic elements, the whole production found it funny. He did not want to specify how they were going to be used because they would lose all charm (and also he had no idea at the time how they would be used.)

Personally, I was one of those who read the book Brave New World years ago, hoping to find an answer to the biggest riddle I had seen in a movie during my childhood. When I had read a little more than a half the book, I sensed that I would not find the answer, and so it was, neither in Aldous Huxley’s book Brave New World, nor in Istvan Nemere’s book Holtak Harca (Fight of the Dead), nor even in the novel version of Demolition Man, because a book of this movie came out, in which more details of the futuristic world were given and the story was extensive. Nowhere do they reveal the mystery of the 3 snails. Years ago, for some strange reason an image of the 3 snails of this movie went viral, in which they tried to give a solution to this mystery, based on the opinion of Sylvester Stallone and Sandra Bullock of how they imagined that the three snails were used, however, this was not official, it was only the actors’ opinion.

Personally, I was one of those who read the book Brave New World years ago, hoping to find an answer to the biggest riddle I had seen in a movie during my childhood. When I had read a little more than a half the book, I sensed that I would not find the answer, and so it was, neither in Aldous Huxley’s book Brave New World, nor in Istvan Nemere’s book Holtak Harca (Fight of the Dead), nor even in the novel version of Demolition Man, because a book of this movie came out, in which more details of the futuristic world were given and the story was extensive. Nowhere do they reveal the mystery of the 3 snails. Years ago, for some strange reason an image of the 3 snails of this movie went viral, in which they tried to give a solution to this mystery, based on the opinion of Sylvester Stallone and Sandra Bullock of how they imagined that the three snails were used, however, this was not official, it was only the actors’ opinion.

In the Middle East country called Kuwait, Demolition Man premiered in theaters under the name “Rambo, The Destroyer”. This was as part of a strategy from the distributor in that country, since Rambo‘s films were absolute blockbusters in that country, so he did all he could to sell tickets, so he didn’t mind adding one more Rambo movie to the Sylvester Stallone saga.

The headquarters of the police department, which had a very futuristic look, is actually the Baxter Way building, and although it has been 27 years, it remains exactly the same, it even seems relatively new.

And speaking of buildings, this movie had the record of having the largest real explosion in Hollywood’s history.  At the beginning of the movie we can see the explosion of the building where Spartan and Simon Phoenix were in. The buildings belonged to the company Belknap, which worked developing hardware, they were not in business anymore and it was going to be demolished, that was taken as an advantage to show a spectacular explosion in the movie. In fact, MTV had a contest in which the winner would have the privilege of pressing the button that would launch the demolition.

The designs of futuristic cars in this movie were taken from designs of the company General Motors.  As you know, these companies have countless car models that never go to production, 19 prototypes were put to service for the production, including the car that works as a patrol car, its name was Ultralite, was useful to demonstrate the technology that was being developed by the company General Motors, making a more efficient car, with lower consumption of fuel. There was only one model available, for the film they needed more, so Warner Brothers covered the production costs, so that the company would build 11 more models for the movie, this cost $2 million. 6 years later we’d see this same model in the movie starring Robin Williams named Bicentennial Man, and as a fun fact, EV1 was the evolution of this model, it was the first electric car built by General Motors, more than 1117 EV1 models hit the road, they could not be bought, those who had the possibility of having one, it was under lease. In 2002, when General Motors cancelled all its contracts, by law, it got back nearly all of the units, which were destroyed and turned into scrap metal. There were many conspiracy theories during those years because of this decision by the company, from being the oil monopoly’s fault, to self-sabotage from the company. The company simply offered the following statement:

“We learned that there is no mass market for such a vehicle. The EV1 taught us that these vehicles force consumers to make too many changes in their lifestyle and therefore these types of cars are not going to be the future.”

Of course, now with Tesla cars, it seems like General Motors was wrong about the future.

Something that was necessary in this movie, since they had taken as inspiration the book Brave New World, they could have talked about the drug or hallucinogen called SOMA, it is very important because basically it is what keeps everyone calm, satisfied and happy with their life, if they do not consume it, they begin to have thoughts, that would be normal, about their life, like whether they like the job they have, thinking about their future or about death. At the time that a person starts to feel a little sad, that persons consumes SOMA and is virtually in everything: in ice cream, in coffee, candy, even in the water – in short, in this future everyone is happy, because all the time they are drugged, although I guess in the movie this very important part was not shot because they did not want to relate the star actors with these prohibited substances.

by the way as extra information to this, the band called The Strokes, led by Julian Casablancas, has a song precisely called SOMA, third song from the album Is This It, it was inspired by the book and tells a part of Brave New World, by Aldous Huxley.