25 Fun Facts And Goofs About The Mask Movie Jim Carrey 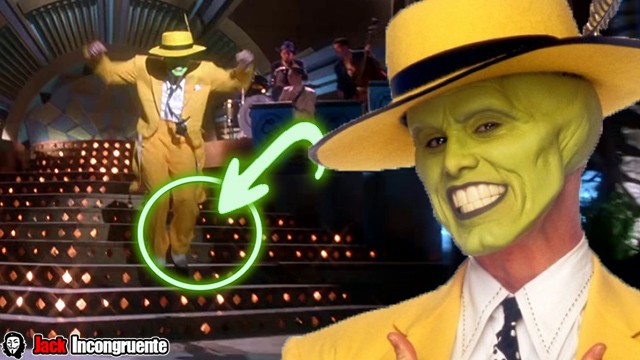 25 Fun Facts And Goofs About The Mask Movie Jim Carrey

Those big teeth that protrude from the character of The Mask were going to be used just in a few scenes where there were no lines for actor Jim Carrey to say, however, as he learned to speak with the fake teeth on, the character became much more weird and funny, so Jim Carrey used then throughout the movie.

The film’s director, Chuck Russell, said that he saved a lot of money in special effects thanks to Jim Carrey’s ability to do cartoonish movements; he was so good at giving the impression of being made of rubber that it wasn’t necessary to invest too much in digital retouching.

There were several impromptu moments: for example, the scene where the Milo the little dog bites the Frisbee and never lets it go, that was not planned; similarly, the scene where Jim Carrey pulls out a condom from his pocket and says “sorry, wrong pocket” was improvised by the actor.

The yellow costume used by Jim Carrey for The Mask is based on the suit her mother had given him when he was just starting out doing stand-up comedy. 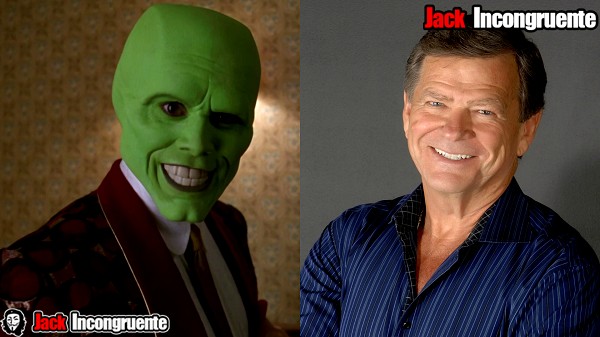 Moreover, according to Jim Carrey himself, he drew inspiration from his father to perform as The Mask; apparently, his father was a rather peculiar person. 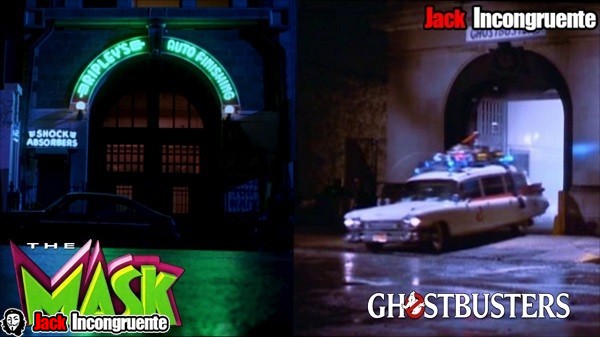 The garage where Ipkiss goes to pick up his car is the same one that was used as headquarters in the movie Ghostbusters.

The Coco Bongo discotheque, where The Mask dances with Tina, is also the name of a discotheque in Cancún, Mexico, owned by Jim Carrey. They perform shows there, embodying the character of The Mask.

One of the factors that drew actor Jim Carrey to embody Stanley Ipkiss, is that he could relate to his character, as both love cartoons and comedy.

And as Stanley loves cartoons, by transforming into The Mask he’s able to act like his favorite cartoon characters: we can see references to Taz the Tasmanian devil when The Mask moves in a tornado-like fashion, to the romantic Pepe Le Pew when he tries to win Tina’s heart, to Bugs Bunny when The Mask dies at the hands of the gangsters, and to Tex Avery the wolf, when The Mask gets excited by Tina’s singing.

Now there is also a little parody that is not related to cartoons: when The Mask is given an Oscar for his performance and says “you like me, you really like me”, they are referring to Sally Field when she received her Oscar in 1984, an occasion that has been parodied thousands of times—even US ex-president Bill Clinton took a stab at it.

Let’s talk a little bit about Tina Carlyle: the role of this character was originally to be given to Anna Nicole Smith, but through twists of fate they discovered Cameron Diaz while she was leaving a model agency­, and after realizing that she was perfect for the role, she was given the job, and that is how a young Cameron Diaz debuted.

There was a moment where they had planned to make a sequel for The Mask; even the Nintendo Power magazine organized a contest to land a small role at the planned film. However, Jim Carrey refused to perform the role again and the project was cancelled. Nintendo Power had to apologize to the winner of the contest as the movie would not happen in the end.

There are certain Dark Horse comics where the character of The Mask is more violent, even going as far as to kill people. The film’s director, Chuck Russell, commented that the movie was originally planned to contain violence, but because of Jim Carrey the decision was taken to create a more comedic character. 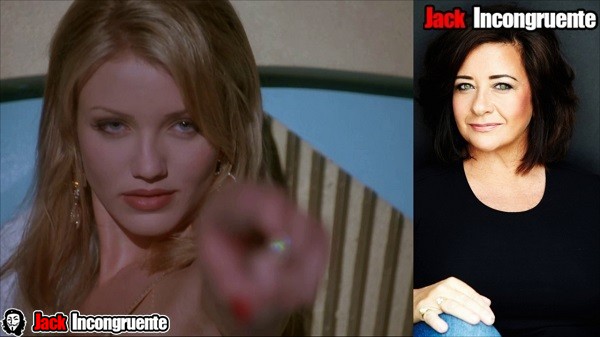 During the scene where we can hear Cameron Diaz singing at the Coco Bongo, in actuality it is actress Susan Boyd who sings behind the scenes.

When the police apprehend The Mask, they pick him up bluntly, causing him to say, “Where are videocameras when you need them?” This is a reference to taxi driver Rodney King’s affair, which was one of the first highly controversial cases where US police officers were recorded acting in bad faith, brutally attacking him… Which is something that still happens today.

Almost at the end of the film, when The Mask says, “That’s a spicy meatball”, it refers to a popular commercial by Alka-Seltzer; the scene became famous because it became known that the actor had to eat some 60 meatballs as he couldn’t perform the line, but in the end The Mask recites the phrase loudly and clearly, as if he had been acting for the commercial.

As The Mask is dying, he utters “Tell Tiny Tim I won’t be coming home this Christmas”. Tiny Tim is a character from A Christmas Carol, a tale where Jim Carrey himself got involved afterwards, as he was selected to perform the voice of Ebeneezer Scrooge in 2009.

When Stanley opens the drawer to take the tickets for Coco Bongo, it can be seen that the tickets are actually for Royal Crown Revue, the band that plays the song “Hey Pachuco”

When Stanley is at prison, we can see how he lays toilet paper over the toilet seat, but when the camera changes to show when Milo enters the cell, after focusing the shot at the toilet again, the paper is nowhere to be found.

During the scene where Stanley wakes up after being The Mask for the previous night, he is shown to hold the mask; the camera changes to make a zoom, but now the mask is over the pillow and not in his hand, as shown in the previous shot.

In another scene, when villain Dorian arrives in the Coco Bongo, he breaks the entrance doors. However, when people exit the discotheque, the doors are restored and in place again.

As The Mask is performing the “Cuban Pete”, a behind-shot shows Jim Carrey wearing kneepads; however, when the camera shows him from the front, the kneepads are not there.

In the scene where The Mask pulled a lever to flush villain Dorian into a water whirlpool, if can be seen that the lever mechanism disappears and becomes a door.

When Milo is about to put on the mask, you’ll notice that one of Dorian’s minions are grabbing the dog by its legs, but after changing shots, it is another person holding the dog and then it’s Dorian’s follower again.

When Tina and The Mask are performing acrobatic dance moves at the Coco Bongo, it can be seen that it is not actually Cameron Diaz the one dancing, but rather a stuntwoman.

We also had a Super Nintendo video game based on the movie; it was a good game, but with a very repetitive gameplay.

In addition, an animated series of The Mask was created.

And this is it for these curiosities, I hope you liked them; if you have not seen the movie, it is worth a shot, it is very humorous and well-acted, and it is one of my personal favorite performances by Jim Carrey. I don’t know about you, but my favorite scene is certainly the dance at the Coco Bongo.

Hoping that you’ll like this video, see you soon.