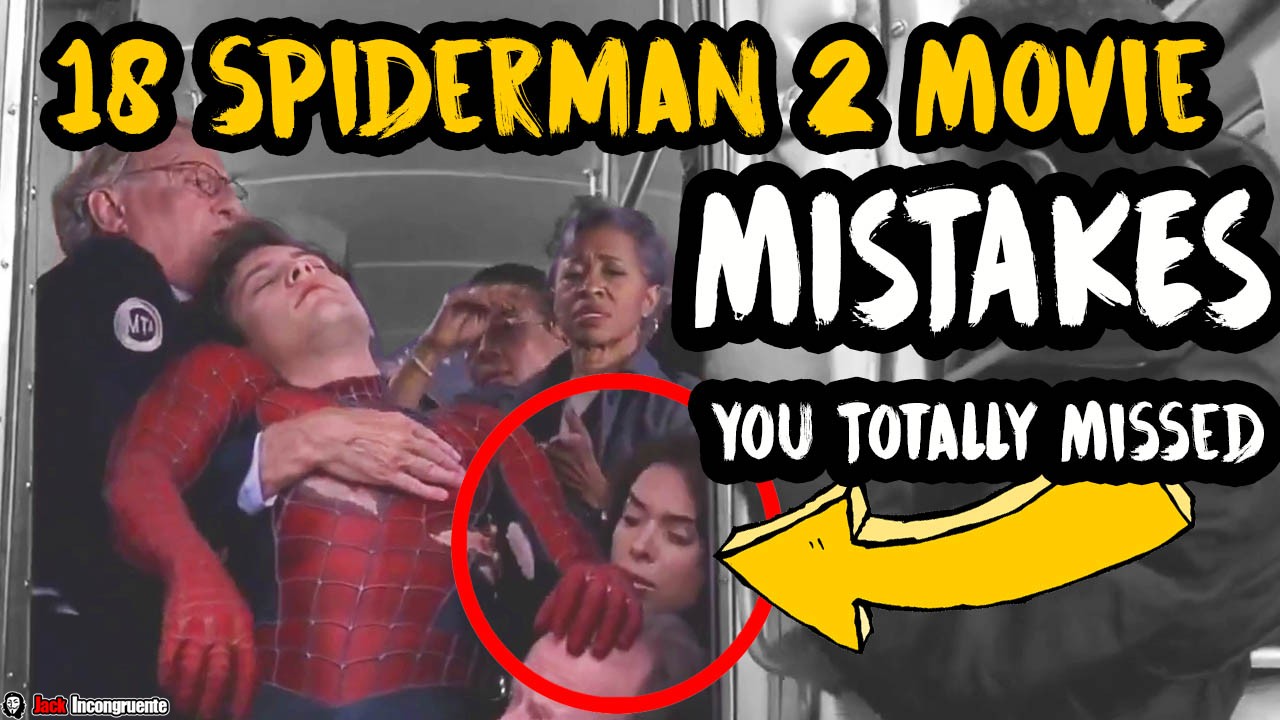 Mistakes of the movie spider-man 2 2004 – The policeman who disappears from the scene.

We start in the first minutes of the film, when Peter parker arrives at his workplace, we can see that a police officer is in the business, when his boss mr. Aziz tells him that he is late, we can see the police eating inside the premises.

The scene progresses, Peter Parker and his boss enter the premises and the police leave at the same time that they enter.

But when the shot changes to a shot from the inside, the police officer totally disappears, it seems that he finished his pizza and traveled to another parallel universe.

Let’s recall a bit of the scene from the train fight, in which spiderman suffers from an explosion in the face, which causes peter to have to remove the mask which obviously suffered a burn.

Later, when the children return the mask, we can see that the large burn on the mask on the right side has disappeared, and there are hardly any indications that it is maturing in the right eye of spider-man.

Mistakes in the Movie spider-man 2 2004 – Action stunt with visible safety helmet on patrol.

On the way to the theater as is customary in the life of Peter Parker, many unforeseen events happen to him, in this case he is involved in a chase of some thieves, and in these scenes we can see how the patrols suffer various shocks.

The policemen inside the units are visible, so be careful with the following scene, since being a strong shock, inside the unit we can see a person, but it is not a police officer, but a member of the production, a stunt, which is equipped with a safety helmet to perform that dangerous scene.

Mistakes from the movie Spider-Man 2 2004 – In the burning apartment the knee pads of the girl who saves Peter are visible on the scene.

Now let’s focus on the heroic scene in which peter Parker dares to enter the burning apartment to save a girl.

Here there is a moment in which Peter Parker almost falls from the second floor, but the little Venus Lam gives her a hand to rejoin her, at that moment you get to see the knee pads that the production team put on the little Venus. so he could get down to help tobey maguire on the scene.

Errors of the movie spider-man 2 2004 – Peter Parker’s suit is torn, but he returns to normal several times.

Now we move to the final scene of the train, when Peter parker tries to stop him using his nets, the moment comes when his suit begins to tear from the left side.

Mistakes of the movie spider-man 2 2004 – The Clock that changes position.

In his last pizza delivery before he is fired, Peter parker approaches the receptionist, a shot is taken to the room, allowing us to see that there is a clock above the girl, at a considerable height, only if it were put standing, the clock would be at his head.

however, when a close up is performed on the receptionist’s face, the clock is now at the height of her head, this came to pass several times when changing shots, sometimes it was shown above and in others the clock was shown below .

Mistakes of the movie spider-man 2 2004 – The fusion of doctor octavius.

An error of this film, which in the novel and in the script if they are explained, is when doctor octavius ​​carries out the fusion process, when he does it creates a kind of little sun, the brightness of this is so intense that it is not possible by any means to see it directly, for this octavius ​​has to use special glasses otherwise the fusion would burn his retinas and blind him.

So far well explained, but in the film no one explains why the rest of the people are not wearing glasses, when they saw the fusion directly, everyone would have been blind, except perhaps Peter Parker.

The scene where aunt may is taken hostage by octopus, we can see that her left arm is carrying her back, there are many shots where we can appreciate this.

However, in the shot where Aunt May falls from the building, there is this shot that shows us that Aunt May’s bag has changed to the right side. In the next scene the bag is back on the left.

This is more than a mistake, it is a very curious detail explained by the production of the film, you see, near the end of the film the dress of mary jane is all torn.

When doctor octavius ​​dies and peter mary jane are safe in the spider web, peter slowly lowers her with his spider web and during the filming of this scene the production team had to secure the dress.

Since the wind caused mary jane’s skirt to rise too high, in this shot the dress is attached with pins.

When her fiancé arrives and goes downstairs, Mary’s garment is completely torn from her legs again.

The scene in which doctor octavius ​​leaves the hospital, with the first thing he meets is with a taxi that ends up sending him to fly.

In this plane we can see how the taxi is about to fall in the middle of the street, where there is nothing, absolutely nothing.

However, the shot progresses and the car ends up falling on top of another taxi, which a few seconds ago was not there.

In the elevator scene, we see actor Hal Sparks standing outside with his dog and holding him on a leash.

But after the poor dog practically walks into the elevator with Spider-man and his leash disappears, we see the man use both hands to adjust his jacket, move his hands here and there, and the leash is nowhere to be found.

And there is no indication that the dog is in the elevator, the animal simply disappeared.

Which causes part of its structure to fall off and fall onto the road, luckily super stan lee was there to save the girl, but in this scene we can see that the piece of structure falls in the middle of the taxi and the red car

Now we will take a look at the cafe scene, in which peter parker and mary jane are, in this scene the arachnid sense of peter is activated, which gives him time to dodge and save mary jane from the car that is launched by octopus .

Now if we analyze this scene, at first we can see how the chair where Mary Jaen was sitting falls to the ground

However, when the scene was repeated from another angle, the actress Kirsten Dunst did not miss the fact that the chair fell to the ground as in the previous scene.

Followed closely, there is this other scene, in which doctor octopus already kidnapped mary jane and incidentally left a whole chaos in the city, people run scared to save his life, they are completely terrified, everything is chaos and destruction

Peter Parker realizes that he no longer needs his glasses, as his powers have returned, so he drops his glasses and enters Fury Mode. But did you realize what happened?

It was a moment of chaos, everyone was running like crazy here and there, however when the slow motion shot of the glasses falling to the floor is made, we can see that people walk calmly down the street, there is no chaos or panic, but a few seconds ago everyone was running in terror, maybe this scene with the glasses was some alternate version, which in the end was used for the movie, but it didn’t end up fitting with the situation that was happening at the time.

For the time the CGI used to create the mechanical tentacles of doctor octopus, the truth that they were very good, however the dedication they put into creating the other characters, such as the crew of the wagon, they look very unconvincing

The CGI is too noticeable in those scenes, even the mary jane CGI gives the impression of being rendered graphics of the quality of the playstation 2.

Mistakes of the movie spider-man 2 2004 – Error revealed by an actor in the scene of the train.

After peter parker stops the train, the passengers prevent him from falling into the void and several of them hold him, we can see how the passenger on the left side accidentally touches the metal handrail, which moves as if it were made of a very material soft and not metal.

This is because it is foam, it was used to prevent Tobey Maguire from hurting his arms when he had them extended, what was not planned is that the extra accidentally revealed that the handrail was foam.

At the moment when Aunt May and Perter visit Uncle Ben’s grave, Aunt May leaves flowers on the tombstone.

By doing so the shot changes, at that moment we can see that a plant has appeared next to Uncle Ben’s grave, in the previous shot there was no plant around the grave.