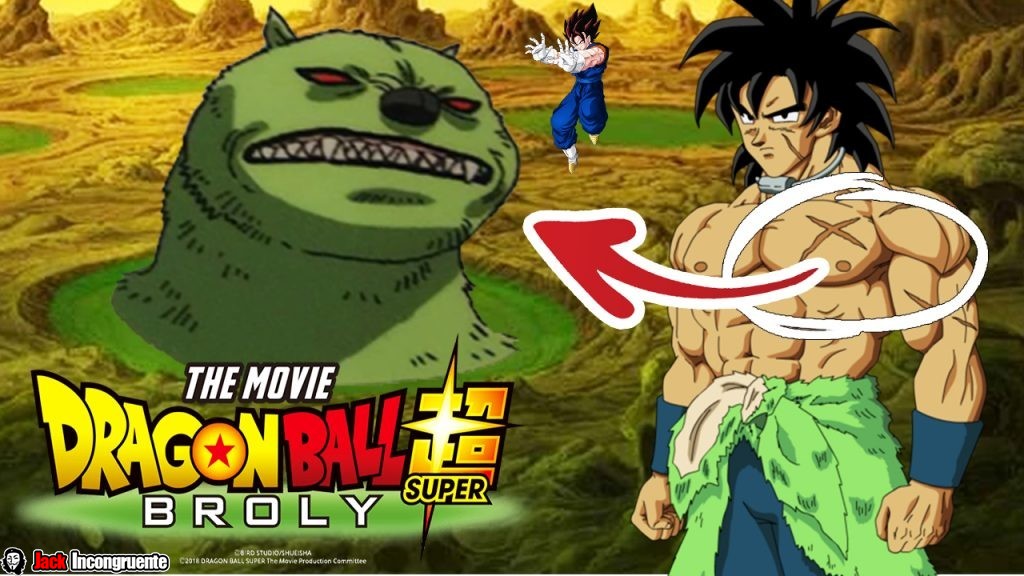 According to the director Tatsuya Nagamine, Akira Toriyama had written a script that lasted 3 hours, but the film only lasts almost 2 hours, so Nagamine and animation director Naohiro Shintani collaborated with Toriyama to analyze what was to be kept in the movie. However, extra scenes will be included in the Blu-Ray and DVD releases.

The Planet Vampa to which the sayayin broly was exiled is a tiny planetoid. The animal and bacterial population of Vampa is concentrated mainly in its small lakes, caves and craters. These creatures are considered to be huge monsters like gigantic green reptiles with dog faces, which are considered more friendly for human beings, since they are capable of forming bonds of friendship with sayayines and being trained.

As it was in the case of the first friend who had broly in this movie, which I simply call Bah, that name was given by broly, because that was the sound he made when attacking.

And as you may have noticed, broyly has a strange green fur on his waist, this one belongs to bah, in fact it is his ear.The father of broly, Paragus pulled it off because he did not want to be friendly with that creature, since of smaller broly he used to spend hours training with bah, broly never attacked the creature, only dodged his attacks, which caused that with the bah time will start to see broly as a friend, to such a degree that I stop attacking him and became like a kind of pet that accompanies him everywhere, was the only living being that made broly laugh and have fun, which annoying Much Paragus, that’s why I ripped off his ear, to scare him and not come back anymore. For that reason Broly has his best friend’s ear tied, to remember him and not feel alone. Really this sayayin is not bad, what happens is that it is easily manipulated and clear when it bothers you can not contain your anger and your power.

In the battle of Gogeta against Broly, both warriors fire a brutal amount of power that even during their confrontation manage to access another dimension, in which they develop the battle, by lowering their energy level, that dimension in which they were submerged is broken . This idea was going to be implemented in the super dragon ball series, when goku aroused the ultra instinct and faced jiren, but Toriyama no longer implemented it until this movie.

In the attempt of the fusion between goku and vegeta to create Gogeta, one can see the classic failed mergers that once happened to Gotenks, we see a failed fusion of fat Gogeta which is called as veku and then a failed fusion of Gogeta skinny and weak.

In this film we could see a small change in frezeer, since the skin is pink, this is the same characteristic with which was presented in the original manga of aira toriyama. Unlike the Dragon Ball Z anime adaptation, where its color is more purple.

As is customary, also the names of the new characters are based on food and fruits, for example Lemo which refers to lemon, lemon

And what is apparently already the new waiufu for many Chira or also known as Chili whose name comes from ordering backwards the syllables of lychee (Litchi chinensis), a tropical fruit tree native to southern China, known in English as Lychee ( hence its pronunciation).

The enthusiasm for this film was so high that tickets sold out in Japan, 5 months before the official premiere.

It is well known that Akira Toriyama resisted including broly to the dragon ball franchise, even not to do it in super dragon ball, I think to Kale, which served only as a tribute to broly, however Akira Toriyama was convinced to incorporate broly, but he wrote a new story and design for this character, which is why broly in this movie is a little different from the 1993 movie.

But yes, we must take into account that in this film, Broly carries significant scars on his body, this as a reference to his defeat in his previous appearances, in the films of 1993 and 1994.

The director of this new movie Tatsuya Nagamine, before making this project took a vacation in Amalfi, Italy, where he took several photographs, which served as inspiration for the design of the holiday home that has bulma in this film .

A controversy arose when it was shown that the origin of Goku and saw that it was different from that shown in Dragon Ball Z. Although Toriyama liked that version, it is not canon to what he wrote in the manga of the year 2014, Toriyama wrote a mini manga titled “Dragon Ball Minus” that told the real origins of Goku, this manga is being taken as a reference for Dragon Ball Super: Broly.

Once again, Frezzer falls short of asking her wish to Sheng Long, but this time she did not want the immortal life, it seems that she lost interest in it, what she wanted was to know the secret of the Sayayin, the origin of their power to obtain a power similar to them.

And attention that Toyotaro, the legitimate successor of Akira Toriyama who writes and draws the manga adaptation of Dragon Ball Super, continues the story of the series by writing a new Saga in the Manga that comes after Dragon Ball Super: Broly, is still unknown if this saga is Canon for the series or it will only serve as a “stuffed” story. But if Akira Toriyama gives her approval, there will be new anime adventures coming soon. Did you think that Dragon Ball would come to an end? Well it seems that it will not have, at least in many years more.